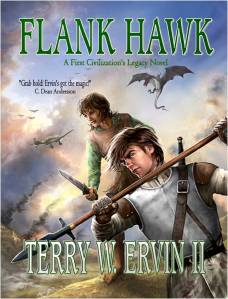 Please tell us a little about yourself. In addition to being an author, I am also an English teacher at a career technical high school, a member of the village council where I live, a husband and father of two daughters. My hobbies include reading (when I get the chance) and raising turtles in my basement.

Please tell us a little about your writing – for example genre, title, etc. I write mainly fantasy and science fiction, but some of my short stories would be classified as horror, mystery and inspirational.

All of my short stories previously published in magazines, anthologies and ezines have been republished in a collection titled Genre Shotgun.

I have a fantasy series (First Civilization’s Legacy Series) with two published thus far: Flank Hawk and Blood Sword. The third novel in the series (Soul Forge) should be released around June of 2014.

My debut science fiction novel, Relic Tech was released in November of 2013.

Where can readers find your book? My books are available, print and ebook, in all of the usual places online (Amazon, B&N, Kobo, Smashwords, iTunes) and available to order from brick and mortar bookstores, although a small handful across Ohio stock them regularly. Flank Hawk of My First Civilization’s Legacy Series is also available in audiobook form via iTunes and Audible.com. Blood Sword is currently in production.

Here’s a link to my website that has all the direct online links:

How long have you been writing and what made you choose the genre in which you write? I began writing around 1998. Back in college I promised myself that I’d write a novel someday and, after some years had passed, I figured I’d better get on it.

I think that most writers write the novels that they would hope to find on the bookshelf, if they hadn’t written it. I enjoy reading fantasy and SF, so those became my focus.

Who or what are your inspirations/influences? I believe the best way to learn how to write is to read and re-read and study the works of successful authors, especially those a writer enjoys reading. The point is to learn by closely observing, especially where a writer might be struggling, such as writing action scenes, pacing, or dialogue. After reading and taking notes from several authors’ works, implement what’s been learned into the writer’s current project and writing style.

For me, I wanted to write Blood Sword, the second novel in my fantasy series as a standalone novel. Although it has many returning characters, I wanted a reader to be able to pick it up and enjoy it without having read Flank Hawk. Still, I wanted to have readers of Flank Hawk enjoy the experience with Blood Sword, complimenting the first novel and not having the Flank Hawk readers feeling like they were getting unnecessary description, information or backstory.

I studied the works by Steven Brust (Vald Taltos Series), Roger Zelazny (Chronicles of Amber) and Laurell K. Hamiltion (the early novels in her Anita Blake Series) to see how they accomplished what I hoped to with Blood Sword.

Can you name both a positive and negative experience from your writing? A very recent positive experience was my daughter coming to me with a brochure for her class ring. I was able to go to my lock box (from book signings) and get enough money together to pay for the ring. What that reflects is a lot of readers who took a chance on my novels. Often when I return to an annual book signing venue, readers make a point to stop by and tell me what they thought, of Flank Hawk for example, and pick up a copy of Blood Sword.

A negative experience was with a particular short story, “The Scene of My Second Murder.” Twice it had been accepted for publication, and twice the story’s rights reverted back to me because the market closed, which I found frustrating. They were well established paying (semi-pro) markets. The good news is that the story eventually found a home, with a market that, as I write today, sadly is no longer open. I guess that says something about the volatility short story publishers. Further, “The Scene of My Second Murder” found a home as a reprint in an anthology, and is also available in my short story collection, Genre Shotgun.

How much research do you do? I do only as much research as I need to. With Relic Tech, for example, I needed to learn about exoplanets, their location in the night sky, and distance from earth, and a little bit about the solar systems in which they’re located. I also had to research and employ time dilation using the Lorentz formula (or transformation) as the spacecraft in my novel travel in the wake of condensed space (a hypothetical method I devised using cascading atomic engines to condense space ahead of the ship). The point was that, even though the spacecraft only approached a small fraction of the speed of light, as the trips through space took weeks to months, there would be an impact, from minutes and hours, up to a few days compared to those not aboard the ship.

Although it played a small part and wasn’t vital to the plot, I felt the accuracy was important to consistency, accuracy, and the feeling authenticity.

With the rise of e-books do you still publish in print as well? Is this medium important and why? My publisher, Gryphonwood Press, publishes both in ebook and print books. Their theory is (and I happen to agree with it) that failing to offer books in print cuts off a potential population of readers. Say a novel sells 90% as ebooks and only 10% in print novels. If it sells one thousand copies, that means up to one hundred readers wouldn’t have read the novel in question. My sales are not that skewed, but ebooks do outpace the print versions.

In addition to ebook and print, Flank Hawk is available in audiobook, with Blood Sword in production. Having a work available in as many formats as possible only makes sense to me.

Do you listen to music or watch TV whilst you write? No, not really. A television may be on in the background, but I don’t actively watch. My mind and thoughts are somewhere else—in story creation mode.

What experiences can a book provide that a movie or video game cannot? A movie or videogame is limited to what can be put on the screen and relayed through dialogue. A well-written novel will more effectively engage a reader’s imagination through dialogue, description, action, and exposition. The reader’s mind can paint a far more vivid and meaningful picture and scope than a movie can. Ever see a movie based on a novel? How much is cut and lost? In general, a ninety minute movie can contain only a long novella length of text.

One advantage that movies and videos games do have over the written word, however, is the element of background music. While the readers can insert, say, the din of battle as they read, music can influence viewer mood and interaction with what’s on the screen. Still, I think that’s a minor advantage when compared to engaging a reader’s imagination.

I guess I’ll add that a writer should refrain from attempting to get feedback on that first draft. Go back and revise and edit first, making the work a solid piece. Why? Because the only feedback the writer will get will be the obvious problems assaulting the reader. Instead of providing insight on plot holes or pacing or more elusive concerns, the bulk of the commentary will be on what the writer could’ve addressed on his or her own. Good (beta) readers are a valuable resource. It’s both improper and unwise to provide them with subpar work to read. Even the most steadfast supporter will be deterred from stepping up to help out again if they had to wade through a substandard draft.

Finally, remember that nobody cares as much about your writing more than you do. Not your spouse, your sibling, your agent or your editor…okay maybe a mentally unstable super-fan of your writing. 😉 But, beyond that, if a reader doesn’t follow through or isn’t able to provide solid input to improve a novel effort, be courteous, understanding it’s not a reflection of or a personal insult directed toward you.

And that’s why good beta readers are such a valuable resource.

What are your best marketing/network tips? Always be polite and professional in any venue—online, at a writing event or convention, or anywhere in person. Failing to do so may very well come back to haunt a writer.

Most authors also like to read, what books do you enjoy? Of course I enjoy reading fantasy and science fiction. I also enjoy reading history books, mainly those that focus on World War II and the U.S. Civil War. Currently I’m re-reading Citizen Soldier, by Stephen E. Ambrose.

Can you give us a silly fact about yourself? I used to do Civil War re-enactment. A good, well-trained soldier from the Civil War could load and fire three aimed shots in a minute. Me? I never got better than two and a half with my British Enfield rifle-musket. Maybe that means I would’ve been placed in artillery?

Where can readers find you on the Internet?

Readers can find out more about me, what I’m up to and find interesting, my writing and my books, and where they’re available at:

My blog (Up Around the Corner): http://uparoundthecorner.blogspot.com/

Flankers ( https://www.facebook.com/groups/253111838083047 ), The Unofficial Fan Page for The First Civilization’s Legacy Series started by readers of my novels.