Tell Us About Yourself

Age: (strokes graying, auburn beard) Forty, give or take a decade or so

Please tell us a little about yourself. I be the captain of the Mistral Thief. I’ve made me an honest fortune. (grins) It never seemed enough. (pauses) Now Eileen, that was a fiery lass to make into a fine pirate. It was Jas that was part o’ a longstandin’ debt ta be paid and irritatin’ at that. I threw him in tha brig and he carried on, shoutin’ and screamin’… for hours. (rolls eyes) Oh, did I mention he has a temper? More fierce than a tempest, and more quick ta appear. That boy is goin’ ta get himself in a heap o’ trouble one day. Will serve him right, if ye ask me.

Describe your appearance in 10 words or less. I be a ruggedly handsome pirate, er, gent that is.

Do you have a moral code? If so what is it? Moral code. (blank stare) By which ya mean, do I follow said laws? Only me own.

Would you kill for those you love? I’ve killed for less.

Would you die for those you love? Nearly did for one lass.

What would you say are your strengths and weaknesses? I be smart, cunning, a clever negotiator o’ sorts. Weakness, have I none.

Do you have any relationships you prize above others? Why? Tha only relationship I’ve had is with tha sea. Well, Eileen, but alas it was not meant ta be.

Do you like animals? Do you have any pets/animal companions? Waste o’ time if ya ask me. What use have I for an animal on me ship?

Do you have a family? Tell us about them. (groans) Aye. Tha whelp, Jas, is me descendant. (shakes his head) Tho’ at times, I’d call him more of a mistake than a man. Tha village idiot.

Can you remember something from your childhood which influences your behaviour? How do you think it influences you? Uh, somethin’ from me childhood? (beads of sweat form on his brow) Nay. Nothin’ of interest to ye. I was but a humble lad, makin’ me way an’ me fortune on tha Swallow. I ‘ventually … commandeered me own ship, the Mistral Thief.

Do you have any phobias? Nay, I fear nothin’.

Please give us an interesting and unusual fact about yourself. Interestin’? Such as when I freed tha air god to possess that boy’s body? (coughs) Ah, I jest! I did manage ta transform Jas inta a right true pirate. I thought Eileen had done well, but Jas… Hate ta admit it, but he took to it like a fish ta water. Took me years before I could captain me own ship. For Jas? Months. ‘course, he was a wee bit motivated, his wife ‘n son…well, ye know.

Tell Us About Your World

Please give us a little information about the world in which you live. (shrugs) I live on tha sea in a galleon ship, a right beaut. Black as tha night, swift as tha wind. She be tried and true, tha only woman I can trust save for… (clears throat)

Does your world have religion or other spiritual beliefs? If so do you follow one of them? Please describe (briefly) how this affects your behaviour. I follow me own rules. Before Pete, I believed nothin’. Gods and goddesses? Never thought I’d see tha day… Changes nothin’.

Do you travel in the course of your adventures? If so where? Reveal me hideaways? I’d sooner kill ya than do that. Press tha issue and ye’ll be meetin’ Davy Jones personally.

Name and describe a food from your world. Grog, Rum. Any spirit will do.

Does your world have magic? If so how is it viewed in your world? Aye. Daria, Pete and tha soul trap. That be tha magic I’ve seen…and wish ta forget. Not many know it exists. Don’t much care that they do. Changes nothin’ fer me.

What form of politics is dominant in your world? (Democracy, Theocracy, Meritocracy, Monarchy, Kakistocracy etc.) Politics? (snorts) I be a pirate. Me word is tha only democracy needed aboard me ship.

Name a couple of myths and legends particular to your culture/people. A changeling, steals children, feeds on their souls. But I discovered, feeds on any human.

What is the technology level for your world/place of residence? What item would you not be able to live without? Technology? What be that? Does this haveta do with that ‘in her net’ or ‘he male’ Eileen was prattling on about?

Does your world have any supernatural/mystical beings? Please tell us about some. Listen hear, mate. I believe ye be repeatin’ yerself. Magic, gods and goddesses, myths and legends, I answered ye straight and true. Do ye doubt me word? No? Perhaps ye are an addlepate.

Author notes: Second on the Right is a fantasy novel which delves in the origin of Captain James Hook and his motivation to seek revenge on Peter Pan. All is not as it seems. This is not your typical J.M. Barrie Peter Pan. The novel is set to release on Barrie’s birthday, May 9th of 2014.

Book(s) in which this character appears plus links

Second on the Right 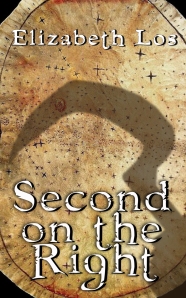 LA MIRADA, CALIFORNIA — Local author and cancer registrar Elizabeth Los of La Mirada, will debut her fantasy novel, Second on the Right, May 9, 2014.

“I was prompted to write ‘Second on the Right’ because the first time I read Peter Pan and watched the Disney movie I felt Captain Hook needed more to his back story than was revealed. Fans around me cheered for Peter Pan. I thought it odd, considering this young boy had, prior to the start of the story, cut off Hook’s hand and fed it to the crocodile. That was no action of an innocent boy. My mind began to weave a story for Hook, one where he originally was the good guy, a family man. Following the events of his first encounter with Pan, perhaps he had changed not only physically but mentally as well. And that is where we see the captain when J.M. Barrie’s story begins.”

Spawned from an ancient promise, treachery and intrigue follow the protagonists through our world and one lost to the waves. Bound by an invisible bond, they are thrust into a fantastical world of pirates and demons.

James Benedict is a just man haunted by evil. Pushed to the edge, everything stripped from him, a new man arises . . . a man whose name strikes fear into the hearts of all who hear it: “Captain Hook”.

Eileen Davis was a timid woman. Through a fateful cruise she finds herself in the company of the Captain of the Mistral Thief. With his guidance, and the meddling of the local barista, she eventually finds her inner strength.

Will the two of them unite through time to fulfill the promise of their ancestors or will tempers ignite leading all to failure?

Second on the Right is Elizabeth’s first novel that lives up to the high standard that J.M. Barrie began.

Elizabeth holds a degree in Cancer Information Management as well as General Management. She plays the piano for a local church, provides computer support for family, friends and work, cares for sick animals when the need arises and raises two children, all while working full-time. Elizabeth conducts author interviews and reviews books, films and albums on her blog, http://www.elizabeth.com, and founded “Genre Specific Review Group”, a Goodreads community group aimed at helping other indie authors.