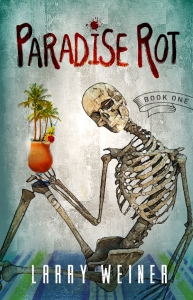 “Kyle Brightman–late of the advertising industry and soon-to-be-late of the 5th floor psych ward–has a job offer he can’t refuse. A new resort in the Caribbean is looking for an art director. Kyle soon finds himself on the Isle of St. Agrippina working alongside a beautiful copywriter with an icy handshake.

Questions arise: Why does the resort management team sport spray-on tans in the Bahamas? How can the resort offer such cheap vacation packages? What does one do with vats of Astroglide?

To get the answers, Kyle must first navigate a series of wildly unpredictable events with a cast of even more wildly unpredictable characters, including a seductress jungle assassin, her partially paralyzed talking Chihuahua, an Ivy League Rastafarian seaplane captain, Kyle’s ex-psych ward roommate, a former Haliburton mercenary, and a French tavern owner with a fondness for goats, all set to the greatest hits of the 70’s. Pablo Cruise never felt so right.”

Author Bio: Larry Weiner is the author of PARADISE ROT (BOOK ONE) and ONCE AGAIN, WITH BLOOD (BOOK TWO). Larry earned a degree in film from California State University, Los Angeles and was an award-winning art director. And then he got the heck out of Dodge (advertising) and decided he was better at fiction for the greater good (entertainment/deep thoughts) than fiction to make people buy stuff they don’t need (advertising/shallow consumerism). He lives on an island in the Pacific Northwest with his wife, two kids and a gaggle of animals.

(Coming Spring 2015) ONCE AGAIN, WITH BLOOD (BOOK TWO) “It’s a maniacal thrill ride of a literary experience, with trenchant observations, wicked one-liners, screwball characters and twisted takes on pop culture smacking you in the face with impunity. It’s gonzo, and galling, and glorious, and once you take that first hit, you’ll only want more.”    —Craig Lancaster, best-selling author of 600 Hours of Edward, Edward Adrift and The Fallow Season of Hugo Hunter