Main character description. Estella Delcour (Tsura) A seer and the Lady of Redfern Manor. She is the most far-seeing of all the Twilit folk, who sees the divine game played between Samael (the blind god) and the Goddess.

In a world where angels, demons, and gods fight over the possession of mortal souls, two conflicted pawns are ensnared in a cruel game. The enigmatic seer Estella finds herself thrown together with Count Mikhail, a dogmatic Templar dedicated to subjugating her kind. But when a corrupted cardinal and puppet king begin a systematic genocide of her people, the two become unlikely allies.

Taking humanity back to their primordial beliefs and fears, Estella confronts Mikhail’s faith by revealing the true horror of the lucrative trade in human souls. All organized religions are shops orchestrated to consume mankind. Every deity, religion, and spiritual guide has been corrupted, and each claims to have the monopoly on truth and salvation.

In a perilous game where the truth is distorted and meddling ancient deities converge to partake of the unseen battle, Estella unwittingly finds herself hunted by Lucifer. Traversing the edge of hell’s precipice, Estella and Mikhail are reduced to mere instruments. Their only means to overcome is through courting the Threefold Death, the ancient ritual of apotheosis—of man becoming God.

“I want to liberate you from your thraldom,” he said. “I have watched over you all, my tender flock. I am Lucifer, the morning star, the first to greet you with my love into this life, and the last to claim you on my dark stallion of death. I have come to free you.” His persuasive voice was soothing and nurturing, like a gentle river rippling mildly over soft bedrock. The cardinal found himself in a daze of awe, and within him woke his longing for power and lust for dominion. “Come to me, let me free you, and we shall destroy the Twilit world that has robbed you of the gifts that you so deserved.” The fatherly voice of the angel was indignant yet gentle, and he beamed at the cardinal who nodded back eagerly. “Let me into your heart, then. Lead me into your house, in this false edifice erected in the name of God, and let us together find the lost sheep in the house of God. I am his true son, after all, prince of the world.” He glided towards the cardinal, his numerous nacre wings extending into the chamber. They shed their own pearly light, and it seemed he floated like a silver vision. The angel knelt beside the cardinal, gazing into his watery eyes. “Let me into his house.” The voice was slightly more pressing now. The cardinal, dazed, nodded in agreement. With a satisfied smile, the angel touched the cardinal’s chest with a slender finger, right at his heart, and breathed over him. The cardinal groaned, falling instantly asleep

The novel challenges the reader to examine the roots of their beliefs and explore the other aspects of the Abrahamic faiths that are seldom discussed. It questions the disparity between paganism and current religions, finding the salient thread that connects our subconscious thinking. It also interprets Gnosticism in a modern way specifically the topic of apotheosis. 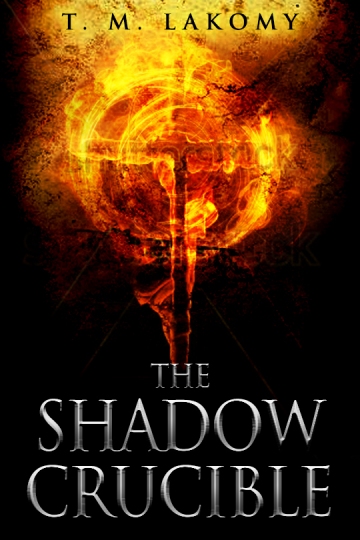 One thought on “Book Spotlight – The Shadow Crucible – Dark Fantasy”