Welcome back to Charles E. Yallowitz, today he chats about mythical creatures.

Charles Yallowitz was born and raised on Long Island, NY, but he has spent most of his life wandering his own imagination in a blissful haze. Occasionally, he would return from this world for the necessities such as food, showers, and Saturday morning cartoons. One day he returned from his imagination and decided he would share his stories with the world. After spending many years fiddling with his thoughts and notebooks, he decided that it was time to follow his dream of being a fantasy author. So, locked within the house with only pizza and seltzer to sustain him, Charles brings you tales from the world of Windemere. He looks forward to sharing all of his stories with you and drawing you into a world of magic.

Mara is a girl with adventure in her soul, and she wants more than her mundane village and boring suitor can offer. Her life is one of few future prospects save a dull marriage, hard work and popping out children. She has no special skills of which she is aware, save more intelligence than usual, courage and a curious nature.

Prince Bran is the heir to not only the Hawthorne Throne, an-end-of-the-world prophecy, but he’s a fearsome Dark Elf. His life is filled with duty, war and magic. He is taciturn, a powerful sorcerer and fearsome warrior.

These two are linked – by a prophecy one has lived by and the other is blissfully unaware of. Aside from that, they have little in common.

Fate has her way and our two fine heroes meet; there are deceptions, battles with unpleasant monsters, surprises, unlikely friendships and a rollercoaster ending.

Told like a fairytale, the story is engaging (I read it through in a couple of hours as I couldn’t put it down), and the characters are great. Mara quickly captures the readers – feisty and brave, a bit naive but knows her own mind and is not afraid to say so. She is not a wallflower.

Bran is a sympathetic character – doing his duty and fulfilling a prophecy that will save his people, despite his own reservations, safety and happiness. The elves are seen by the humans as alien and ‘hideous’, with strange and mythical ways; the humans are viewed as primitive and weak. And both factions are proven wrong.

Well-crafted and filled with adventure this fantasy tale is definitely one for readers of mythic tales and fairy tales. Younger readers may find the monsters and the battles unsettling but this is a good read for any age.

Conflict is a constant. When force on force is inevitable only the intrepid need come forth. Summon the Skirmishers to their eternal purpose, to face a foe who must be opposed at all cost. Gird yourself and join the brotherhood of ‘do or die.’ HEROIKA: SKIRMISHERS is an anthology of desperate struggles in far-flung time-scapes, the age-old smell of battle and death. SKIRMISHERS –Tales for the bold among you!

A HANDFUL OF SALT by Sean Poage.

THE NAKED DAEMON by S.E. Lindberg.

SOULS OF A LION by Tom Barczak.

IN THE SEASON OF RUST by Charles Gramlich.

A LION IN KAMERUN By Ken Kiser

THE PATROL by William Hiles.

There will be interviews with the characters and authors to follow.

A shapeshifter who spies for the fey conquerors of the mortal world fights her urge to help an oppressed human child. Her duty points one way. Her inclination, another. How will she choose?

The only elf able to stand in for the big guy—Santa himself, away on sabbatical—can’t be found. His cohorts hire an elf PI plus partner—Diz and Dee—to track down the necessary missing fellow.

A faie knight, banished from the realm under the knowe, loves the bright world and the mortals who dwell there. But the faie king wants his knight back, and he prefers tricks and cheats for tactics.

A healer mage discovers a young man dying of fey magic on the steps of her perfume shop. Battling the fairy queen to save him puts her heart at risk.

Consort with the fey in the 13 tales of Here Be Elves—magic, myth, and mayhem await you.

I am delighted to announce the forthcoming release of the latest in the Here Be series.

From fable to legend, these wondrous beasts enchant us. Healers or harmers, no one truly knows the heart and horn of the unicorn—dare you seek the answers?

Part of the Here Be Myth Monsters and Mayhem series 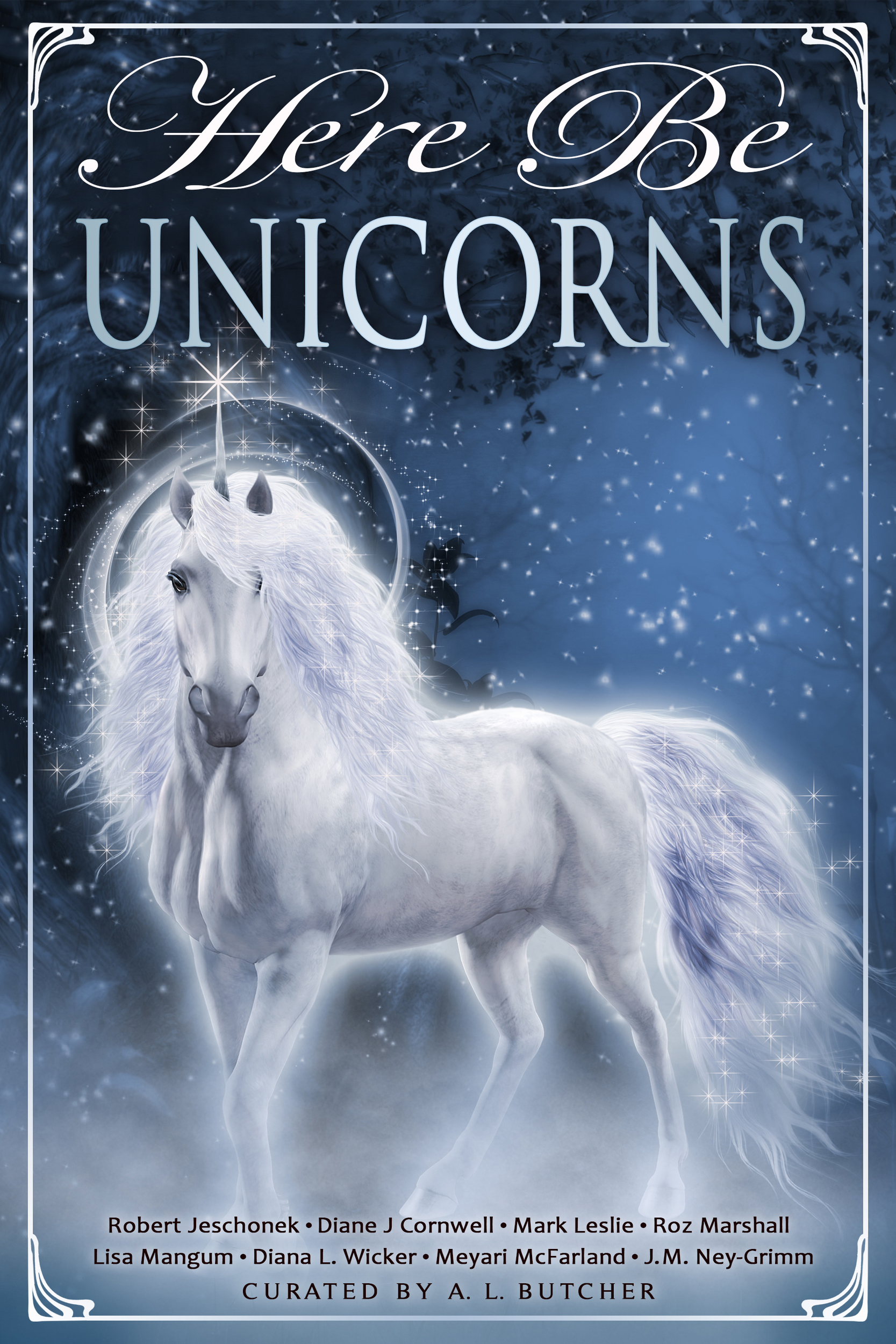 A Game of Horns – Lisa Mangum

The Hunt of the Unicorn – J.M. Ney-Grimm

One Horn to Rule Them All – Lisa Mangum

And The Unicorn You Rode In On – Robert Jeschonek

I’m pleased to announce the forthcoming release of Here Be Merfolk Bundle – the latest in the Myth, Monsters and Mayhem series. This should be on sale from 26th Jan.

The call of the deep rings ever in our ears, from myth and legend to crime and mystery. Sea-people, mer and monsters, immortals and reluctant heroes feature in this sea-worthy bundle.

We, the Ocean – Alexandra Brandt

Sinners of Magic by Lynette Creswell is a fantasy tale following the adventures of young adults Crystal and Matt. Crystal is a strange girl, haunted by visions, and odd occurrences and has no answers for her skills. After she saves her friend from drowning a strange bird arrives on her windowsill. Then answers start coming and a splendid adventure really starts. The world is interesting – with elves, sorcerers, monsters and orc-like beings. The rules of the world are strict, and inevitably get broken and this leads to more problems. There is death, there is wicked magic, there is love, courage and intrigue.

It took me a while to get into the book and to connect with the characters (it may be an age thing as they are young adults – and I haven’t been that for 25 years…). That said once the adventure gets going the story is exciting, well-written and the world well crafted. The two protagonists are out of their depth, taken to a strange realm they never believed existed, and faced with life-threatening revelations and situations but the bond of friendship doesn’t wane. I found myself really wanting Crystal to find the answers, the evil lord to be defeated and the good guys to win out. Did they? Read and find out.

I shall definitely pick up the other two books in this trilogy.

“I am Saelth and I have come to slay your monster,” he announced. His words were bold and his demeanour bolder. Behind him rode the fiercest of his band, axemen and archers, trackers and swordsmen. A mean crew indeed and feared about the land; fur-clad and blooded, they were blades for hire.

Synopsis: He who bargains with monsters beware! A hero forges an unholy bargain with a witch and learns magic never forgets.

In a land of forbidden magic, a mysterious cave holds both riches and danger for three adventurers who discover a mighty treasure and a terrible secret.

On the nights when the moon rose to its fullest, its light a silver sheen upon the roof of the Great Hall, a terrible monster came. His voice was like the rasping of flesh on a blade, his countenance blighted and ugly, twisted like melted flesh with great weeping sores and a putrid smell. Many warriors had tried to vanquish this foul creature, and now their bones lay with the prince’s in the barrow to the east of Eadsham, the settlement that had been forged by blood and toil by the first king, Aedwin. Widows were aplenty and many children made fatherless from this awful beast. Doors were bolted and barred, and not even the lord himself dared to face it. Such was his shame.

The king grew ever older and wishing to marry a man of bravery and honour to his daughter messengers once more rode out north, south, east and west in search of a hero, one with the fortitude to face this cursed beast, as they had done so many times before. On a night when clouds covered the moon’s light and rain fell in drops the size of marbles, the sky was rent with lightning as a great human warrior rode to the gates of the village. “I am Saelth and I have come to slay your monster,” he announced. His words were bold and his demeanour bolder. Behind him rode the fiercest of his band, axemen and archers, trackers and swordsmen. A mean crew indeed and feared about the land; fur-clad and blooded, they were blades for hire.

“We have slain creatures from nightmare and beasts that made grown men piss their drawers. Your curse will be lifted if the price is right!” His band nodded, for their rates were high indeed so that only lords and kings could afford their blades.

“No weapon forged by man can vanquish it! You’ll simply earn your place in the Hall of the Dead,” someone called.

Saelth looked around for the one who had spoken. “Then I shall go to the Halls of the Dead a hero, not one who cowers behind the table, or beneath the bed. I am no coward, nor simpering woman. Nothing is all powerful, or unable to be vanquished, save the gods.”

Why should readers buy this book?

The Warrior’s Curse is a tale of greed, adventure, monsters and the price of magic, set in a dark fantasy world. But it’s also a tale of people, their weaknesses and what some will do for power. It is a story within a story, as we start with a group of adventurers plundering a cave and learn of dark deeds and unholy bargains.

If you like mythic style fantasy, fast-paced adventure with a twist then you’ll love this.

The Warrior’s Curse also appears in Here Be Monsters

Fairies, fair folk, imps, trolls, and pixies—they haunt our myths from Ireland to Iceland and everywhere else. Join in the fairy fun, or fairy fear, as good, bad, and mischievous they show themselves. Dare you take the trip to Fairyland? No one who returns is ever quite the same.

The Giving Year by Alexandra Brandt

The Troll’s Belt by J.M. Ney-Grimm

The Kitchen Imps by A. L. Butcher

They stalk our myths and hunt our past—dragons—humankind’s greatest and oldest foe. Good, bad, legendary and deadly. Dare you enter the dragon’s lair?

Tales of dragons, their friends and their foes.

Here Be Dragons on Bundle Rabbit

The Crown and the Dragon – John D. Payne

Of Blood and Scales – A. L. Butcher

Ascension of the Whyte – Karen Wrighton

Of Dragons and Centaurs – Deb Logan

The Legend of G and the Dragonettes – Russ Crossley