My name is Joseph Carey Merrick. Most people know me as the Elephant Man. The story in which I appear is titled Withering Blights.

Who is your ‘lover’ in Hell?

Antonia Ford. In life she was a spy for the Confedaracy during the American Civil War. Here in Hell she once spied for Guy Fawkes until she was captured by Satan’s agents, tortured and then sent to the Mortuary, where the Undertaker removed her eyes before reassigning her. We take care of each other. I am her eyes, and she does for me what my physical condition and limitations prevent me from doing.

Love in hell, isn’t that a contradiction? How does this work?

There is no contradiction at all. The physical act of love is painful, more than I can or am willing to explain. That is one of Hell’s punishments. But true love transcends the act of sexual congress. Love often begins as a platonic relationship. It is of the heart and of the mind, and yes, even of the soul, damned though we may be. Love, loyalty, friendship, even honesty and integrity—these things can be found in Hell, for many a damned soul has changed their ways in the futile hope of redemption and salvation. Love exists in Hell, to be sure. Antonia and I help, care for and do our best to protect one another. Is that not love in its purest form? The paradox here is that, in Hell, love becomes truly a spiritual emotion.

Many of the denizens of His Satanic Majesty’s realm have a curse – what is yours?

I was cursed at birth with my ghastly affliction. During one moment of agony and despair, I cursed my Creator, and thus upon my death found myself in Hell. Upon my one and only visit to the Mortuary, the Undertaker declared me to be a masterpiece sculpted by the hand of a mad genius. He refused to tamper with my grotesque beauty, and thus sent me on my way.

Who are your friends/allies here?

First, there is Madge Kendal, the beautiful actress who befriended me in life. She is a wealthy actress here in New Hell City, and because of her wealth and generosity, she gave to me Withering Blights, an old, Gothic mansion she owns. Antonia and I live there, and we earn enough diablos to live on by begging and doing what jobs we can. Doctor Victor Frankenstein is another dear friend, as is his companion and assistant, Quasimodo, the famous Hunchback of Notre Dame. They are hard at work right now trying to find eyes to give to Antonia, so that she may see again, and a new, young and healthy body in which to house my brain. In life, the good doctor succeeded in doing just that, although with disastrous results, if you recall.

Describe your home/environment in Hell.

I do not sleep much, for sleep often brings with it nightmares even more horrifying than what I have seen and suffered here in Hell. My former life was a weekend at a holiday camp, compared to Hell, what I have witnessed here—plagues, torture, floods, endless pain—all give birth to these unsettling dreams. Thus, while Antonia sleeps, I often roam the dark corridors and empty chambers of Withering Blights, contemplating my afterlife and agonizing over an eternity here in the Netherworld.

Why do YOU think you’re in Hell?

As I have already stated, I countered-cursed the Almighty for cursing me with this ghastly malady, this terrible affliction which prevented me from having and enjoying any sort of life at all and was, eventually, the cause of my death. 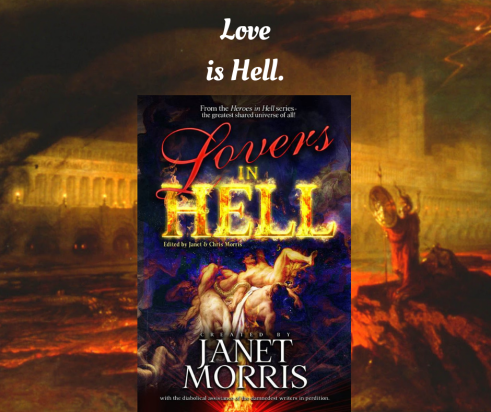 Joe Bonadonna is my given name. I am the author of the heroic fantasy Mad Shadows: The Weird Tales of Dorgo the Dowser (winner of the 2017 Golden Book Readers’ Choice Award for Fantasy), published by iUniverse; the space opera Three Against The Stars, published by Airship 27 Productions; Mad Shadows II: Dorgo the Dowser and the Order of the Serpent, published by Golden Box Books; the sword & sorcery adventure, Waters of Darkness, in collaboration with David C. Smith, published by Damnation Books/Oracle Press; and in collaboration with Erika M Szabo, Three Ghosts in a Black Pumpkin (winner of the 2017 Golden Books Judge’s Choice Award for Children’s Fantasy), and The Power of the Sapphire Wand, both published by Golden Box Books. I also have stories appearing in: Azieran—Artifacts and Relics, published by Heathen Oracle; GRIOTS 2: Sisters of the Spear, published by MVmedia; Heroika: Dragon Eaters, Poets in Hell, Doctors in Hell, and Pirates in Hell— all published by Perseid Press; Sinbad: The New Voyages, Volume 4, published by Airship 27 Productions; and most recently, in collaboration with author Shebat Legion, our story, Samuel Meant and the Little Black Cloud of the Apocalypse, appears in Michael H. Hanson’s shared-world anthology, Sha’Daa: Toys, published by Moon Dream Press. In addition to my fiction, I have written a number of articles and book reviews for Black Gate online magazine.

Tell us about your story for this edition.

Withering Blights concerns Joseph Merrick, the Elephant Man, and his friendship with Antonia Ford, with whom he’s in love, although he doesn’t quite realize it. He thinks he’s in love with Madge Kendal, their benefactress. But she’s in love with the dastardly Francois Villon, the famous Vagabond Poet of France. Being friends with Victor Frankenstein and his assistant, Quasimodo, Merrick asks the good doctor if he can provide Antonia with a new set of eyes. Victor, always up for another challenge, readily agrees to help Antonia, and then decides he may be able to construct a new body for Merrick or perhaps put his brain inside the skull of a young, healthy body, something he is, of course, quite familiar with. But in order to do that, Victor and Quasimodo must do business with the owners of the Cannibal Café, the two most infamous body snatchers in England’s history: William Burke and Willam Hare. There is also a sub-plot involving Madge Kendal and her tempestuous relationship with leech, varlet and gigolo, Francois Villon. Can love conquer all, even in Hell? You’ll have to read the story to see how that all plays out.

What inspired you to use the character(s) you’ve chosen?

I have now written about Victor Frankenstein in Poets in Hell, Doctors in Hell (in which Quasimodo becomes the doctor’s new hunchbacked assistant), and Pirates in Hell. It was Janet Morris’ story arc for Lovers in Hell that first inspired me to come up with something that would hopefully read like a cross between Emily Bronte and Edgar Allan Poe. While watching two Boris Karloff films, Frankenstein and The Body Snatcher, I began to wonder what sort of experiment I can get Victor involved in this time around. Then suddenly, as sometimes happens, the idea of building the story around the Elephant Man popped into my brain. I did my research and chose Antonia Ford and Madge Kendal as “love interests.” Picking the two body snatchers, Burke and Hare, was a no-brainer. And then, after watching Ronald Colman in the film, If I Were King, in which he played Francois Villon, I realized what a lost opportunity it was not to have used Villon in my story for Poets in Hell. So I added him as Kendal’s rogue of a companion and voila!—the story wrote itself after that.

How did you become involved with this project?

Having already written stories for Poets in Hell, Doctors in Hell and Pirates in Hell, I was once again invited to contribute a story to Lovers in Hell. I have so much fun writing Victor Frankenstein and Quasimodo and I wanted to keep going with them, I wanted to get them involved with characters I thought would fit in with their own little corner of Hell—the Golem Heights and Goblin Manor. I wanted characters I could possibly use again in other stories, sort of creating my own little infernal repertory company, if you will. I thought Merrick, and Burke and Hare perfectly suitable “actors” for my purposes. There are other characters I’ve used in my earlier tales set in Hell, and I hope to bring some of them back for future stories. After all, the dead and the damned don’t die in Hell, they just get reassigned when they’re sent off to the Mortuary.

Writing for a shared world is challenging, how do you meet that challenge?

If possible, I try to link my stories to those of the other writers. We can borrow, loan and exchange characters, if we wish, per prior agreement and with certain conditions. I always write for the main story arc Janet Morris sets down, and that’s my guideline; whatever else pops up is more icing on the devil’s food cake. The challenge is writing in a more literary style than I would say, for a pulp fiction adventure yarn. I try to match my prose and dialog to the theme of each volume, and to the story I’m writing, in particular. I do the same with dialog. With Withering Blights, for instance, I watched Wuthering Heights, with Laurence Olivier, and The Elephant Man, with John Hurt. I tried to capture some of the nuances of their speech, as well as that of other actors appearing in the films. For Victor Frankenstein, I try to do a bit of actor Colin Clive, who played the doctor in the Boris Karloff film, and for Quasimodo (who has regained his hearing in Hell), I model him on actor Charles Laughton, although I try to make him speak with more of a French accent, and a bit more eloquence; I also decided to give him somewhat of a different personality: still heroic, still a force to be reckoned with, he is my comic relief. For my story in Pirates in Hell, which features a number of long-deceased movie stars from Hollywood’s Golden Age, I just watched their movies and picked up on their style. Jean Harlow was the most fun to write.

Tell us why you chose this story to tell out of so many possible options?

There were no other options. Withering Blights was the story that popped into my head, and it’s the story I wanted to write.

If you could pick any quote about Hell which would be your favourite?

I think this quote is perfectly suited to Victor Frankenstein, who is so wracked with guilt over the consequences of his actions in life, and if you’ve read the stories I’ve written about him in Hell, you’ll understand how well this fits him. “The torture of a bad conscience is the hell of a living soul.” — John Calvin.

Thank you very much for this opportunity.

Check out out blog, A Small Gang of Authors, at: https://asmallgangofauthors.blogspot.com/

My Facebook author’s page is called Bonadonna’s Bookshelf, at: https://www.facebook.com/BonadonnasBookshelf/