FROM THE AUTHOR OF THE INTERNATIONALLY RENOWNED SILISTRA QUARTET. 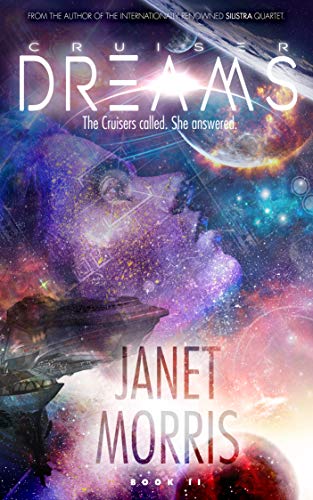 Cruiser Dreams: A young woman inherits an empire beyond all imagining, where interstellar cruisers become sentient and the cosmos itself is transformed.

In this epic of political treachery, interstellar insecurity, human passion, and artificial intelligence, Morris continues the saga of the fiery girl Shebat, stolen away from a decaying and primitive Earth to become the adoptive heir to the Kerrion Empire.  Molded to serve the designs of the Kerrion state, Shebat instead becomes the harbinger of change sweeping the civilized stars.

Against the chaotic background of simultaneous social and technological revolutions, Shebat struggles to face the fact that the man she loves is her implacable enemy, that the man she reluctantly married is perhaps her only ally, and that her space-faring cruiser may be her only true friend.

Praise for Dream Dancer  Book One in the three-part saga of the Kerrion Empire:

“Not since Dune have we witnessed a power struggle of such awesome intensity!” Eric Van Lustbader, author of The Ninja and The Bourne Legacy.

Praise for Cruiser Dreams, Book Two  in the bestselling three-part saga of the Kerrion Empire:

Janet Morris is an international best-selling author who lives with her husband on Cape Cod.