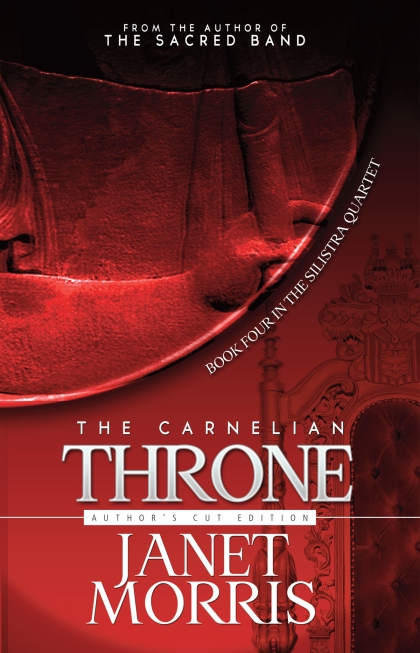 In a far and dystopian future, three rulers seeking to make truth of prophecy explore the “shores of which none are empowered to speak,” a forbidden continent where humanity no longer rules.

“Gate!” he bellowed over the storm, his dripping lips at my ear. The deluge had made us sparing of words. Under leathers soaked to thrice their weight, I shivered in spasms. Arms clutched to my sides, I stared into the rain. The driven sheets slashed me for my audacity. Lightning flared, illuminating the riverbank white. A moment later, the bright noise cracked through my head. The hillock trembled.

Over the gate danced the lightning. Its crackling fingers quested down thick-crossed slabs of iron, seared flesh. Emblazoned as they tumbled were those six-legged amphibians, their streamered tails lashing, scaled, fangful heads thrown back in dismay. I saw their afterimage: beryl and cinnabar, aglow upon the storm. Then their charred remains splashed into oblivion, spun away on the fast current.

“Down!” One man shouted, the other shoved me, and as I staggered to kneel in the sedges, the god that washed this land shook it, grumbling. I crouched on my hands and knees on the bucking sod, between them. Little protection could they offer up against shaking earth and searing sky, not even for themselves, without divorcing themselves from the reality they had come here to explore. And that they would not do.

Somewhere far off the weather struck earth again. We knelt on a fast-declining shore. On our right and left, steeps ascended, cresting in a plume of dense rain forest. In that moment of illumination the whole river valley and the gate set into the river stood bared of shadow. Six times the height of a man was that gate.

The Carnelian Throne makes you think as it explores the revenge of nature upon humanity once we have despoiled land and sea, and what our manipulation of genetics may mean for the future as the three foretold seek truth in prophecy where men no longer rule.

Hardcover on Barnes and Noble

Paperback on Barnes and Noble

About the Author:  Best selling author Janet Morris began writing in 1976 and has since published more than 30 novels. She wrote the bestselling Silistra Quartet in the 1970s, including High Couch of Silistra, The Golden Sword, Wind from the Abyss, and The Carnelian Throne. This quartet had more than four million copies in Bantam print alone, and was translated into German, French, Italian, Russian and other languages. In the 1980s, Baen Books released a second edition of this landmark series. This third edition is the Author’s Cut edition, newly revised by the author for Perseid Press. Most of her fiction work has been in the fantasy and science fiction genres, although she has also written historical and other novels. Morris has written, contributed to, or edited several book-length works of nonfiction, as well as papers and articles on nonlethal weapons, developmental military technology and other defense and national security topics.